…..And then only at the weekend.

Some people had a hard time getting up this morning for work. I didn’t. I had a long lie.

I am, however, having a hard enough time here trying to justify the amount of time I am spending on my laptop, blogging.

Boyo 1 keeps making cracks about, ‘How are your new wee pals doing?’ I never skelped his arse enough when he was younger. Now, it just hurts my hand.

Hubby is wondering why we keep having soggy pasta for dinner. Apparently, my inability to blog and accurately gauge time is having a detrimental effect on the whole family’s palate.

Advising them that I am pursuing something I want to do elicits strange questioning looks of wonder.

It’s not that they’ve never seen me spend so long at my ‘puter. But, then, I was building farms, feeding chickens and zooming through levels of brilliance at all sorts of simulated construction work.

What were we thinking? Have you any idea what this place looked like when you all left?

Somebody’s kids (ok, mine as well) had a riotous time in the garden. Making muck slides down that wee slope. Spraying water on it to get a consistently good slide. Clabber everywhere.

Some bastard stubbed all his fags out on the wooden garden table and then left them at his arse when he nipped off early.

I don’t know who was copulating undercover of the garden shed but you could, at least, have blindfolded the hamster. His poor wee eyes were bulging this morning.

And whoever was responsible for the karaoke in the living room. Did you really need to hock up hairballs on to every surface as you belted your lungs out? I have my suspicions.

Rather too much alcohol was consumed by some people. My head had a jackhammer in there this morning, playing, ‘boom-titty-boom-titty-boom-boom-boom’. Not my favourite rhythm.

Hugh Jackman did, at least, make an appearance and calmed everyone down with a wee rendition of, ‘Look Down’. Again, not my favourite but beggars can’t be choosers.

I didn’t get up close and personal with him. This may have been due to the fact that he had brought Dolph Lundgren with him and they were surrounded by lustful males and females gazing at them with rapture.

It may also have had something to do with my own gang, encircling me and crying profusely, ‘Don’t do this to daddy’.

I refrained from telling them that he could, in fact, be their daddy as I had fantasised about him at some rather opportune moments. Too much information, I felt, for impressionable ears.

Some invited guests failed to make an appearance but I was cool with that. By the time waifs and strays from around my neighbourhood had got a whiff of my stew, the place was pretty much heaving.

Which brings me back to the point.

I’m not allowed to have any more parties due to the disgusting behaviour of many. And one, in particular.

This one drank way too many Drambuies, passed out on the kitchen floor, but not before muttering, ‘Heart attack….sweating right down to my ankles’ and other such gibberish that no one could understand.

After putting me to bed, hubby has declared there will be no more virtual parties as I was too ill to clean up the mess and someone pissed in the goldfish pond. R.I.P. Flipper and Bluto.

So, Little Borneo Girl,  http://littlegirlstory.wordpress.com/2013/07/19/i-am-part-of-the-wordpress-family-award/ thank you for your award which I know I was nominated for oomph number of days/weeks ago.

I’m really glad you made it last night. Nice hair, by the way. But, things will have to be low key this time around.

My nominees for the WordPress Family Award are:- (people with a lot more class for starters).

If you have class, some measure of decorum when invited to a party and feel like a member of the WP family, I invite you to claim this award. But, only if you’ve not had it before. ‘Cos twice results in death by Drambuie.

Now, if you’re too shy or whatever, you’re gonna miss out here.

Here’s what to do.

Think of why you feel like part of the WP family. State your case and claim it. Easy peasy.

It doesn’t mean you’re vain – although that works too.

It doesn’t mean you’re shit hot and everyone sails downstream of your waft.

It doesn’t mean that if you ‘break the chain’ you’ll have a gazillion years bad luck.

Just claim it if the cap fits.

P.S. Right click on the image, save to picture file, write your piece, insert pic. Bob’s your uncle.

Tell them Scottishmomus said you can have it. And she’s a mum and a teacher so she definitely knows best. Sometimes. And, mainly, when she’s been drinking. Sweaty ankles.

If you are exceedingly superstitious, you may prefer to do it this way. 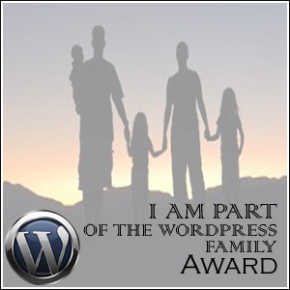 For all who feel part of the WordPress Family.

The creator of this award has the following to say:

” This is an award for everyone who is part of the “WordPress Family” I started this award on the basis that the WordPress family has taken me in, and showed me love and a caring side only WordPress can.  The way people take a second to be nice, to answer a question and not make things a competition amazes me here.  I know I have been given many awards, but I wanted to leave my own legacy on here by creating my own award, as many have done before. This represents ‘Family’ we never meet, but are there for us as family.  It is my honour to start this award. Thank you Shaun @ http://prayingforoneday.wordpress.com/ ”

Here are the rules:

1. Display the award logo on your blog (see above).
2. Link back to the person who nominated you (also see above).
3. Nominate 10 others who have positively impacted your WordPress experience (see below).
4. Don’t forget to let your WordPress family members know of your nomination.
5. That’s it! Just pick 10 people that have accepted you as a friend, and spread the love!

Failure to thrive  an adjunct to his fame.

Just a name to me.

A legend to some.

Sky rockets ripping behind the scenes.

Lashings of approval from above.