I thought I saw a rainbow with its lights on

it glittered through the dark

I thought I saw it, people sliding on it

laughing as they sped

it felt so good

I thought I saw you there among the others

a twinkle in your eyes

I smiled to see you happy, that made me so

I thought I saw it

I think I thought that dreaming was believing

I think I thought

you slid on rainbows too

I think tonight I’ll dream in black and white so

I never think those thoughts

of light and you

Trouble is that rainbows come unbidden

sliding on its curves

coloured realm that always draws me in

See you on the rainbow, silver’d lining

as each day dawns

slide awhile with me, it costs us nothing

and thoughts, fresh coloured, every morn.

Happy New Year, everyone! May your days be filled with light and colour. Thank you so much for your continued support. I appreciate every visit and comment. All the best to each and everyone for 2016. Hugs and love. You’re a grand crew!xox 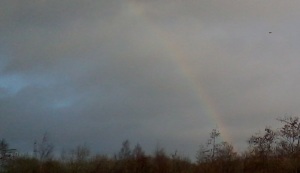 Hidden by clouds this rainbow,

Only a portion revealed,

Shades of light seen for a spell,

More often than not, though, concealed.

A glimpse of light in its splendour,

Iceberg submerged by ocean so deep,

Clouds conceal all the clues.

Stark matter can do this so well.

Doomed to diminish in darkness,

Luminosity destroyed by dullest of days,

There, by and by, different portion of sky,