Investment in all else but sin,

and calm descends from high

cocoons with head to breast,

Imagine, if you will, for a moment,

Soft feathers alight on your heart,

Soothing, by touch, to impart.

Whispers of breeze blown within,

Scalded and blistered of skin.

Imagine a cloak made of feathers,

Down of the fluffiest fleece,

Enfolding and holding together,

Protecting and giving you peace.

Imagine a hug made from heaven,

Lined by all angel wings,

Embracing relief that it brings.

I’ll be on the ferry by now, off to Ireland for a week or so for a family holiday. I’ve been rushing around like a maddy getting bits and pieces organised so my reading has been scant at best. This is the only post I have scheduled and I’m going to have a break away from all things techy – well apart from my kindle and maybe my phone! Hugs to all you lovely people and see you on my return, God willing.x

Now, I’m actually fine, so no smart-arsed comments about losing the plot. I had a wee conversation in the comments section with John over at JMC813. He wrote a fabulous poem called Silent Scream which rather put me in mind of a time I wanted to…well, never mind what. If you want to know, visit John’s. It’s all there in the comments.

But fear and terror

Climb to the mountains,

Up since five a.m. today exploring

Your dreams and hopes, fears and tears,

stirred into my coffee.

I take it black,

I drink it down in earnest

appreciation of the full flavour,

to give a mix

I inhale from leaves too.

First meal of the day.

with words fed onto pages.

words that speak of deepest feelings and thoughts.

nectar to my needs.

I rinse my mug, stub out my cigarette, close my kindle and begin my day.

But they will invite me back

See how she sits in her high chair,

Obedient child to the last,

See how she sups up her porridge,

Flavoured with history past.

See how she spits out the spoonful,

See how she picks up her own now,

See how she learns from endeavour,

As natural an act as can be,

See how she grows to an adult,

See how some children, retarded

By parents who will not let go,

Damaged by some who don’t know

That nothing is worth being stuck there,

It breaks under pressure from fairy tales,

Sometimes we’re born to be wild.

Wild as the woad on our faces

When history wrote out our path,

But timing is now, and with courage,

Freedom not given, we grasp

The spoon from the parent who knows not

A whit of development’s way.

Our children are free as a nation, come

‘I’m tired now’, he said, by light of darkness,

mumbled into night his waking thoughts,

a plaintive sort of fatigued exaltation,

no defeat but crushed by earthly knocks.

A glimmer in the darkness listened keenly,

spluttered into life to ease his pain,

descended on his forehead as he struggled

In dreams he saw a dancer up above him,

then dancing on the parquet floor of hairless pate

and, in the gentle tapping of her footsteps,

he traversed back in time through all life’s gates.

To childhood days that merged with church’s bell ring

and infant hands so soft within his grasp,

sunshine holidays and harder times when

they’d pulled in belts and wondered if, perhaps,

the work and want, the endless, restless passage,

fraught with cares and doing all he could

were worth the love of all that gathered round him.

He sighed in sleep and smiled at all the good.

The dancer danced and then lay flat upon him,

impressed herself, as light, into his mind,

bestowed the recollected visions of his voyage

His breathing eased and slowed to mellow movements,

sleep on in peace or ring aged matins bell.

Light maintained its presence in his mindset,

centred on his soul when he awoke,

he smiled at love that lay asleep beside him

and whispered thanks to angels when they spoke.

Cry gently, my love, in parting,

loud tears mar the time we shared as one.

fragile heart may break at one more tap.

Embalm me, my angel,

fly to me, wing’d aura be your guiding map.

Know nothing need part us,

no distance, time, nor space created in between.

Be ready, alert to

strength of Everest to your scaling feet.

One of my nieces graduated yesterday from Glasgow University, a beautiful young woman now independent from the hallowed halls of a structure of sublime architecture. My camera phone does not do the cloisters justice but I hope my words may. There were tears of pride and happiness as the 100 or so new graduates from the Veterinary School took their Hippocratic Oath and tears of familial love as the sworn-in veterinarians applauded their family and those who had guided their path for their five years of study. It was very moving. I slept for 10 hours straight when I came home! 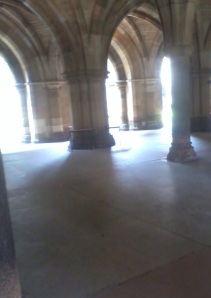 Under shelter’d walkway ’round the courtyard of my soul,

In custom-built protection I may stroll

Some time or two, meandering in seclusion,

In contemplating fragments of the whole.

Colonnades supporting covered arches, portico to all that lies beyond,

Face uplifted to the filter’d breezes,

Where intersections advocate for essence,

Intercede and plead my way back home.

In teardrops’ rain a moment of calm capture, the briefest sort of pleasant reverie,

Whose hush of rapid rapture leaves me breathless,

Past and present catch up to the future, in cathedral’s mind where echoes may be tamed,

Rebecca’s graduation coincided with her dad’s – my brother –  34 years ago and the Independence Day celebrated by Americans everywhere. I hope your day of gratitude for liberation was as special as that of my niece’s. I hope your future shines from cloistered thought.